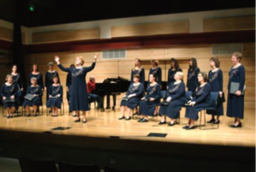 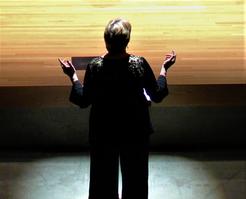 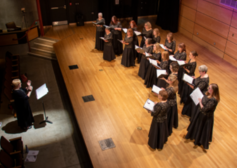 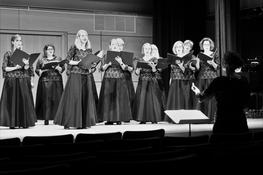 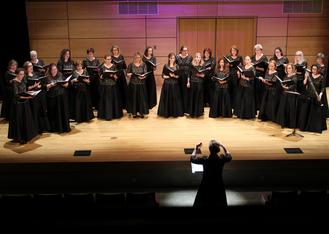 ASTER Women's Chamber Choir is a  small (18-20 voice) women's ensemble in Broomfield, which frequently performs at the Broomfield Auditorium and in other local locations. ASTER is an open and affirming organization. We welcome women of all ages, ethnicities, religious and sexual orientations. We have kept our members' dues to a minimum so that women of all economic backgrounds will be able to join. Also, we have provided financial assistance to women who cannot afford to purchase our concert attire and provided stipends to women who needed assistance to pay for childcare while they are attended rehearsals. The meaning of the name "ASTER" comes from The Meaning of Flowers in which Gretchen Scoble wrote: “Asters speak of the tiny beginnings from which all great things proceed.”

ASTER is excited to open our Fall concert with “Earth Prayers” a new work composed by Martha Yordy.  Growing up in New Mexico she had the opportunity to understand the sacred relationship which Indigenous people have with the earth.  Rhythms associated with Navajo music and poetry by members of the Ute and Sioux tribes inspired this piece which was commissioned by the choir.

The centerpiece of ASTER’s Fall concert will be Broomfield Composer Pete Simpson’s cantata “Sacagawea” which we first performed in the fall of 2007. Donna McCuaig will be the narrator who portrays Sacagawea. Her heritage is Chippewa, Wyndot & Seneca.

Pete Simpson says this about his cantata: “This piece takes a very personal look into Sacagawea’s thoughts and feelings.  The events are documented, but not a word she said was recorded, to my knowledge.  So, the narration is invented, but most of the text is selected from various poems and songs of Indigenous nations and I feel they express what her emotions may have been. This version of Sacagawea was commissioned by and written especially for ASTER Women’s Chamber Choir.”

Other music on the concert will include a set of Spanish lullabies accompanied by guitar and Still I Rise by the distinguished Black composer Rosephanye Powell.

Come early to look at the baskets which volunteer Jennifer Voige has assembled to raise funds for ASTER.  Bid on your favorites and find some special gifts for the holidays.

You can support a specific BCAH program, like ASTER, by sending a check to BCAH and note the program name on the memo line. To make an online donation, click the “Donate” button, and specify the program to which you are donating.​